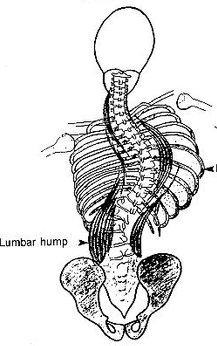 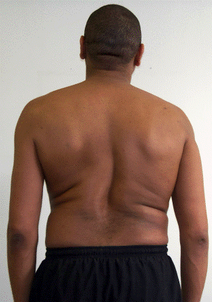 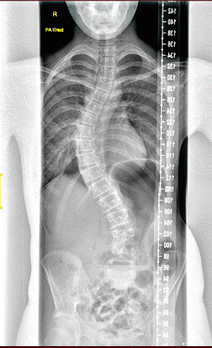 Maria Skłodowska-Curie's research was crucial in the development of x-rays in surgery. During World War One Skłodowska helped to equip ambulances with x-ray equipment, which she herself drove to the front lines.

Of all the women who have ever won the Nobel Prize, Maria Skłodowska-Curie was the only who received it twice.

Structural defomities are characterized by permanent structural changes in the bone.

There is a fixed curve of the bones of the spine.

Functional scoliosis is treated by correcting the underlying problem. The spine itself needs no treatment.

Scoliosis due to bony abnormalities of the spine present at birth. These anomalies are classified as failure of vertebral formation and/or failure of segmentation. This form of scoliosis is relatively rare. Scoliosis could also be part of a syndrome, such as Klippel Feil syndrome.

Scoliosis in children with any disorder of the neurological system, such as spina bifida, cerebral palsy, spinal cord injuries and muscular dystrophies.

As children grow, their trunk gets weaker. The curves become worse during rapid growth.
Spina Bifida - Paralysis caused by congenital defect of the spinal column.

Fibrous dysplasia is another cause of scoliosis in children. It may affect the spine with the highest prevalence in the lumbar region. Connective tissue disorders, such as Marfan syndrome and Ehlers-Danlos syndrome, can be associated with scoliosis.

Secondary scoliosis is a vertebral pathology such as an osteiod osteoma. It is a painful scoliosis with a strong limitation of the forward bending of the trunk.

Lateral spinal curvature that appears before the onset of puberty and before skeletal maturity. Three-dimensional spinal curvature, that include changes in the sagittal plane, lateral flexion and rotation of the spine.

Scoliosis which is present after skeletal maturity. Adult Onset scoliosis - from age 18 and beyond.

Scoliosis diagnosed between 3 years and 9 years of age.

A curvature of the spine that develops before three years of age.

A curvature of the spine that develops before three years of age.

A spinal postural change that simulate a scoliosis in order to avoid a pain. The main features are the absence of the hump and the presence of pain.

A non-structural deformity of the spine that develops as a manifestation of a psychological disorder.

Many patients are concerned about the amount of radiation exposure they will receive during regular check up for scoliosis. Radiation exposure has been linked to some cancers, and doctors want to minimize any risk that XR pose to patients. Since x-rays are one of the ways to follow the progression of a curvature and determine the need for treatment, they are often a part of the care of a patient with scoliosis.

Nowadays, with modern techniques, the amount of radiation exposure can and should be minimized.

The disturbances of human posture can be classified as structural or non-structural.

The structural misalignments indicate the presence of morphological abnormalities within the bones and soft tissues (fascia, muscles, ligaments, tendons).

The structural misalignments include:

The most common types of non-structural misalignment of body posture in the sagittal plane in both children and adults are:

They influence the skeletal and the muscular system leading to the functional disturbance.

The kyphotic posture is characterized by:

The lordotic posture is characterized by:

The flat back posture represents a faulty posture that differs from the good one by the following: flattened lumbar lordosis and flattened lower part of thoracic kyphosis.

Any spinal curvature in which the apex of the curvature is between the T2 and T11 vertebrae.

Any spinal curvature that has its  apex at the t12 and L1 vertebrae.

A spinal curvature whose apex is between the L1 and L4 vertebrae.

A lateral curvature with its apex at the L5 vertebra or below.

It is used to evaluate skeletal and spinal maturity.

It's correlated with vertebral growth stages. It's based on a scale from 0 = completely immature to 5 = end of growth.

Risser type 4: 100% ossification, with no fusion to iliac crest.

Scoliosis is generally classified as Mild, Moderate or Severe. Any measurement under 10 degrees is not considered to be scoliosis.

Severe scoliosis - if the Cobb angle is over 50 degrees

The most important factor discriminating juvenile scoliosis from adolescent idiopthatic scoliosis is the risk of deformity progression. Curve progression is related to several factors:

Abnormal spinal curvature beyond 30 degrees poses risk for ejection injury. The center of
gravity of the upper torso lies in front of the spine. Whenever loads are applied along the spinal
axis, as in ejection, a bending movement is produced which increases the likelihood of a
compression fracture.

Scoliosis can occur as part of many syndromic diseases (both genetic and non-genetic syndromes). Examples include:

To book an appointment:

either email us on

or call or text us on:

Consultations are by appointment only.